Our final quest was to find a green stone idol of a water lizard. Our reading of Lowls’ notes provided us with the information that the lizard in question was actually Bokrug, a Great Old One that was venerated by the amphibians of the city of Ib. That city though was destroyed by the Kingdom of Mnar a thousand years ago, and the victors took the idol back to their capital of Sarnath, where it was held in the temple of Zokalar.
Though the people of Sarnath also worship the Great Old Ones, they have a hatred of all things non-human and have been conquering their neighbours for generations. According to the information we found, Sarnath was famed for its marble city walls over 300ft tall, and wide enough for two chariots to pass each other on top. Every year they celebrate their victory over the creatures of Ib.
We decided to enter the dreamlands whilst still at the Isle of Arenway, in order to benefit from the possible protection of the druids. As we settled into sleep and our dream selves descended the mystical stairs, the sound merriment and music came up from below.
We arrived in a huge feasting hall, full of people dressed in a wide range of fancy clothes, partaking in food, drink, drugs and sex. Looking around, this seemed to be but one of many such halls, all filled with people. The food was of great quality, and the people seemed more than happy for us to join them in their festivities. 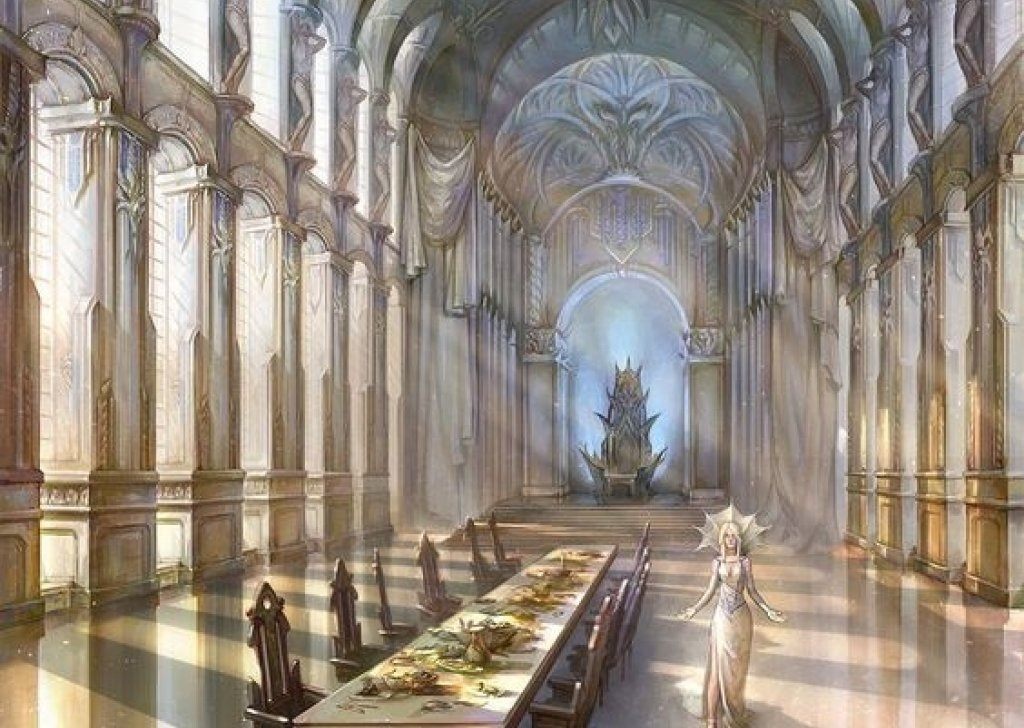 This was the thousandth yearly celebration of the victory of Sarnath over the city of Ib. However, nobody here seemed to know of Count Haserton Lowls, and nobody seemed to know much about the idol of Bokrug. Even a group of philosophers we spoke to knew little, and seemed to have even less interest of the world outside of their city – considering everything not of Sarnath to be worthless.
As our conversations with people progressed, we became aware of the sound of waves from outside, growing louder over time. Then there was a sudden scream from the far end of the hall, and a sudden crush of people started surging towards us. We could see a flight of stone stairs which ascended up towards the ceiling, down which was pouring water.
Coming down the stairs with the water were green frog-like humanoids, which we later learned were undead Shades of Ib. With ghostly hands they grabbed at people, visiting fear, terror and death upon those they caught. Before long, we were the only ones left standing in the hall along with these unnatural creatures of Ib – and so they turned their dark lifeless eyes on us.
The confusion and terror had at least given us time to prepare ourselves with magical defences. My sister Catiana, protected by the force armour I had placed upon her, struck at them with her ectoplasmic fists. Ray dropped fire upon them, and Gregor was able to put the bow that the druids had recently gifted to him to great use. It was Erasmus though, channelling holy energy, who was really able to strike hard at these creatures.
Before long the few that had come down the stairs had been defeated, but we could hear what sounded like chanting coming from up the stairs. The flow of water was also increasing, as was the sound of crashing waves.
My sister took on her incorporeal aspect, and flew up the the stairs, following after everyone else, and leaving me to pick up the items she had dropped and take up the rear. The stairs led up to the roof, which appeared to be guarded by a group of will-o’-wisps – though they soon fell to Gregor’s arrows.
Behind the stairs was a second group of Shades of Ib, led by their high priest who held aloft the lizard statue. As his unholy chants filled the air, so Bokrug himself appeared from the sea amidst a storm of raging winds and crashing waves. As the Great Old One swam lazily towards the city, he trashed any boats that got close to him, and drove the rising waves towards us.
Most of us are driven half mad by the sight, but Ray was able to move over towards the priests, as was Catiana. She drew upon her link with me to grow greatly in size, ripping a spell from my mind in order to protect herself from their evil.
Very quickly, most are laid low, the high priest himself being slain by Gregor. As the priest fell, Erasmus rushed forward to grab the statue, waking himself and vanishing from the dream.
As Bokrug descended upon the city, the rest of us managed to wake ourselves from what was rapidly turning into a most terrible nightmare.
Our dream selves now have in our possession all seven of the items that were, according to Lowls, desired by the Mad Poet. By retracing our steps to find the Mad Poet and presenting to him these gifts, we hope to find a way to regain the memories that were taken from us. According to the fractured shade of Lowls that we spoke to in the Dreamlands, now that we have the items he will be able to lead us to the oasis where the Poet can be found.
We also know that the Poet told Lowls to seek a book named the Necronomicon in the collection called the Mysterium, found in the Qadiran city of Katheer. Whilst we seek the Mad Poet in our dreams, we should continue on the Sellen Starling down towards Katheer to try and find this book ourselves.
After Katheer, we know that Lowls planned an expedition to find the lost city of Neruzavin, presumably somewhere in the interior of that country. It is my assumption that we will need to follow him to this final destination.
It is now the morning following the events described above. All of us suffered nightmare visions during the night of what had happened to the city of Sarnath. Bokrug descended upon it, and slew all of its inhabitants in ways I only wish I could forget. The city was smashed and destroyed, and presumably the kingdom with it. Hopefully we have left that creature behind us, and that he will not come seeking his green stone idol.
Post Views: 181