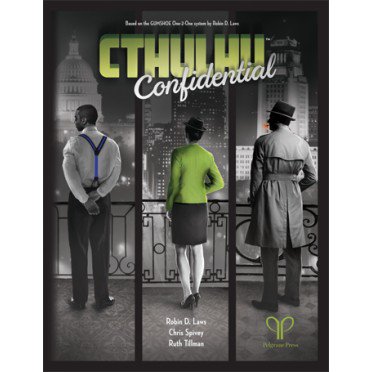 One of the RPG books I picked up as part of the Bundle of Two back in February was Cthulhu Confidential. This is a game published by Pelgrane Press and written by Robin D Laws, designed specifically for a game involving one player and one GM.
First of all a disclaimer: I’m not a huge fan of Cthulhu. However, my other half is and she doesn’t get to actually play as a player very often since she generally ends up having to run a game if she wants to experience some Cthulhu. I decided to give this a go as a one shot to see how it worked, and give her an opportunity to actually play for once.
This isn’t the first time I’ve run a one on one game. In my experience, you don’t really need a special set of rules for this – most recently I’ve done it with Pathfinder, but I’ve also done it with other systems. You just need to be aware that one character has a limited range of skills and abilities compared to a group of four or more, and it generally all works fine.
So in terms of how well it worked for a single player situation – just as well as any other game. I don’t think it has any particular advantages over other systems in this regard. Some of the aspects, such as it not being possible for the character to die or go insane (unless they really want to) until the end of the scenario made sense, but that’s a matter of play style as much as system. 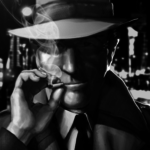 In terms of the adventure – we played The Fathomless Sleep, with Dex Raymond being played pretty much as written. It took about 6 hours to play through, with a lot more time spent seeking records and background information than was expected I think. But it went fine. The ending came close to disaster (a bad back combined with some bad dice rolls), but ended with a successful conclusion involving a large amount of dynamite. Overall the adventure worked and much fun was had.
In terms of the actual book though – I would rate it as one of the most poorly thought out RPG books I’ve come across recently. I’m really glad that I had the PDF version rather than the dead tree version, since the latter would have been near impossible to run. The system makes heavy use of handouts for all the problem and edge cards – and these are included in the middle of the book. No extra sheets for easy cut out, just embedded at a random point.
The cards aren’t even labelled correctly. There will be a reference to Problem #7, and when you find it, Problem #7 is something completely different and it turns out #11 is what you need. There were several instances of this – it wasn’t just a once off – so the book really could do with some editing.
As far as running the game went, it was sometimes hard to find the information needed (to be fair, this is hardly a criticism unique to Cthulhu Confidential). There was often irrelevant (mostly) background information front and centre, with the actual information needed for the scene not always obvious to find. Going through the adventure before hand and marking the important bits helped (again, I’m so glad I had the PDF), but organisation could have been much better. The author also had a habit of switching between use of first name and last name for characters – something which really didn’t help considering that I have enough difficulty remembering names as it is.
Given the well defined flow chart of scenes and how to get from one to another, I did initially fear that it would play a bit like a fighting fantasy book. Fortunately, this didn’t happen, and the adventure seemed to flow reasonably smoothly. One of the things mentioned initially in the main rules is that it’s important that the player is willing to talk to the NPCs, and the adventure does seem setup to assume that this will be the main form of information gathering.
My player was far more willing to try to break into places to find information, and though one place in particular (the Warehouse) did have a little bit of prepared information, I had to ad-lib some clues so that it didn’t come across as a complete dead end. A bit of off the cuff modification is part of the GM’s job, but I felt that some obvious approaches had been pretty much ignored in favour of others.
The title of sections could have been more obvious – it wasn’t always clear which scene to use due to the somewhat poetic titles chosen (Into the Hypno-Dimension is a great sounding title, but it doesn’t say anything about what it’s about, especially when you’re desperately trying to hunt for the right section).
However, one feature I really did like, and which too many published adventures miss, was the inclusion of a complete timeline of events up until the start of the adventure. That helped – a lot.
My biggest final issue I think though is that there is absolutely no way I would ever use this system to run my own adventures. The amount of work necessary to prepare all the problem and edge cards, as well as the scene transition diagrams and related material is too much. If I wanted to run my own one-on-one game, then I’d use a more standard system. It’s a lot less effort. Even though I’ve done similar things with defining task difficulties and results in a game like Pathfinder, it was a lot easier in that system then I fear it would be using Cthulhu Confidential.
To finalise, it was fun to run and play and the adventure seemed self-consistent, which I guess is ultimately the important thing. It felt like a lot of work to prepare for though, and sorting through all the detailed background to get to the actual important information that was actually needed felt like a lot of work. If it was going to be used as a spring board for more adventures, then this may have been okay. However, I don’t want to run a sequel to this using my own plot lines. At least not using this set of rules.
The organisation, layout and editing of the book was generally poor. This is the first Pelgrane Press work I’ve used, and to be honest I was expecting something a bit more polished (entirely based on listening to Ken and Robin Talk About Stuff).
I don’t have a burning desire to run one of the other adventures, but it’s not something I’d completely refuse to do if my arm was twisted enough. With a lot more editing it could be much improved, but it was ultimately the system and editing that let it down, rather than the adventure itself (which was pretty decent).
Post Views: 267